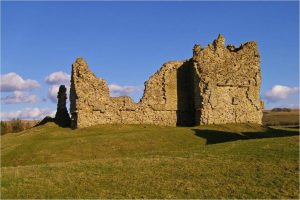 Bewcastle is an isolated village steeped in Roman and Border history. The church, farm, and castle occupy the site of a Roman out post fort which guarded the Maiden Way, the main Roman road north from Birdoswald on Hadrian’s Wall some 10km (6 miles) to the south.

The fort was dedicated to a local deity, Cocidius, and is unusual in having six sides, rather than the more usual rectangle or square. The fort was probably built around 122AD and occupied until AD 343.

Bewcastle Cross is said to be the finest Anglican Cross in Europe. Dating from the 7th century, it is dedicated to Alcfrith, son of Oswiu,King of Northumberland who ruled from 641 – 670 AD

The stone castle was constructed between 1340 and 1360 using much material from the old Roman fort. During the 15th and 16th century it provided sanctuary for locals during Scottish raids. 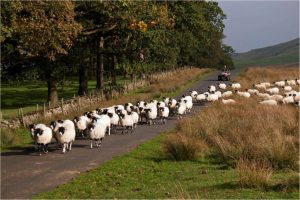 This area was much fought over by the Border Reivers; feuding, lawless, local families who raided each others farms taking livestock, goods, and possessions.

The Romans were here from AD79 until the late 4th century:

This area of north western England has been known as the ‘Debatable Lands’, largely because in medieval times it was part of England, at times Scotland, and often contested by both.  It was nominally part of the kingdom of Northumbria but usually had a separate ruler.

The motte and bailey castle:

Ale houses: there were many in the vicinity. It was not unusual for households to brew their own beer and then to sell the surplus. They were supposed to pay taxes. In 1292 the tax was one and a half pence per gallon for the strongest brew! The house now called the Limekiln near the bridge was once a pub which finally closed around 2000. Like many public houses it was sited near a ford and also a blacksmith’s forge – a useful place to wait for your horse to be re-shoed. There was a pub at the Demesne in the 18th century. The so-called ‘last pub in England’ was the Dog and Gun at Bailey on the road to Newcastleton. It closed in 1990.

The James five of Scaleby Hill

But ne’er wad to a neighbour ill

She raised a batch of honest men

And chained the foreman to the mill

Sir Walter Scott: visited this area – he certainly stayed at Gilsland Spa and included aspects of life in this area in his books. He wrote about the local method of catching (some said murdering) fish using a barbed fork called a leister’