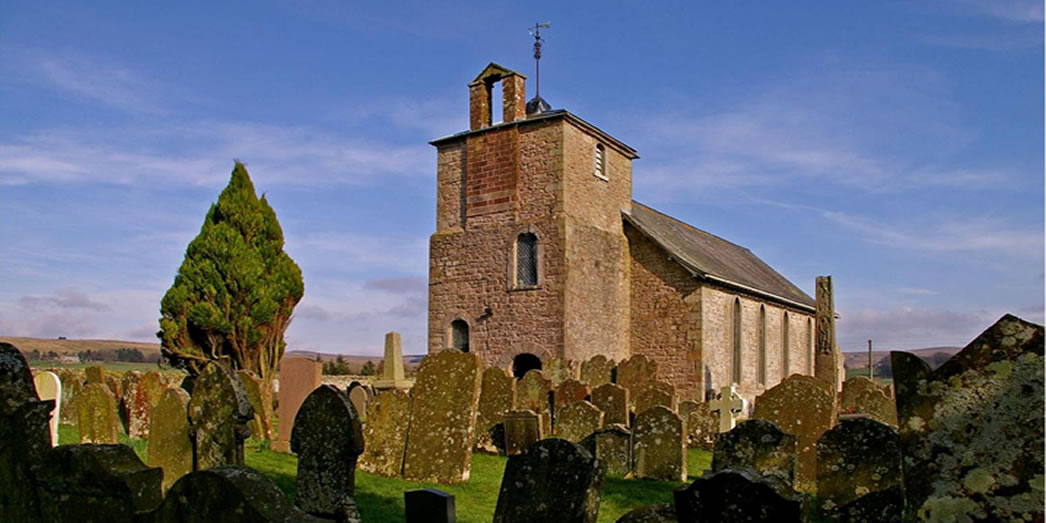 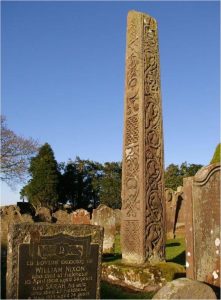 The Bewcastle Cross, with its cousin at Ruthwell on the Solway coast, are probably the finest to survive from Anglo-Saxon Britain. Their style looks to Northumbria, and beyond there to Rome and Syria, rather than to Galloway and Ireland. They are likely to date from after 675 when this area (formerly known as Rheged) had come under Northumbrian sway, and when Benedict Biscop brought masons from abroad to work in building his new monastery at Monkwearmouth/Jarrow, the likely base from which the team came to carve our cross here. The Syrian link is not so surprising when we learn that many monks and craftsmen fled persecution there and went to Rome, producing 5 Popes and also a great reforming Archbishop of Canterbury, Theodore of Tarsus, around this time.

The runic inscriptions on the Cross have been both worn and damaged over the years, and their meaning is not now certain. Possibly they commemorate King Alchfrith of Deira, who made an unsuccessful bid for control of all Northumbria c.664, and his wife Cyneburh. After that we are in the realms of speculation, but one possible story of the Cross’s erection is that Alchfrith lived in exile after 664, died here (his mother was a Rheged princess), and that the memorial was organised by his half-sister Abbess Ælfflæd of Whitby (d.714). Others though look to a slightly later date in the ‘golden’ reign of King Eadberht (737-758) and regard the Alchfrith story as a red herring!
The three figures on the Cross are crucial to its significance. 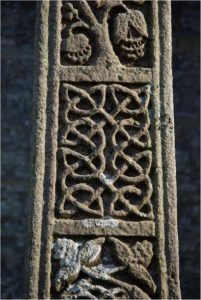 The top one is John the Baptist, holding the Lamb of God, and walking on the desert hills, proclaiming Christ in the wilderness and directing our gaze to Him. Below is Christ himself as King and law-giver, being recognised by the animals of the wilderness who are at his feet. And then below the long inscription comes the famous and controversial figure of a man with a falcon or eagle on a perch beside him. It would be remarkable at this date to have a lay portrait, and of such size, on a memorial, though the figure clearly has echoes of an Anglo-Saxon nobleman.

The figure we would expect is St John the Evangelist (whose symbol is an eagle), but if so he is depicted in a very unusual way.

Recent research has, however, found a figure of St John in a Syrian (again!) manuscript which shows him in a seated but not dissimilar pose, and with – again unusually – a lamp on a stand by him which looks so like our bird that a modern art historian mistook it for one! Was the cross carved by craftsmen in the Syrian tradition who had a similar picture with them, and made a similar mistake? This is a debate, though, that will continue…

If the figure is St John, the ‘meaning’ of the Cross is clear. In the hole by his arm may well have been a relic of the true Cross, and an altar would have been set up in front of it, perhaps when the Bishop came to baptise and confirm. John the Evangelist calls the candidates and congregation to hear the good news and share in the victory of Christ – and in the long inscription the monument seems to be called a ‘victory beacon’. Their eyes lift, and they are invited to recognise and worship Christ like the animals, and call on His name (which is carved there too) – and then hear the call of the Baptist and be baptized and have their sin taken from them.

It is still a powerful message for today.

Thanks to the venerable Dr David Thomson,
Formerly Archdeacon of Carlisle,
now Bishop of Huntingdon for this description.

In 2017 a team from the University of Lethbridge in Canada and of  Istituto di Scienza e Tecnologie dell’Informazione A. Faedo in Italy undertook as part of a larger project the detailed digital scanning of the cross.