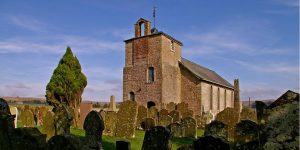 The church is on the site of a hexagonal Roman fort, unusual in that most Roman forts were four sided. Probably named Fanum Cocidi after the local pagan god Cocidius, the fort was originally built from turf and timber and garrisoned by the First Nervan Cohort of Germans.

It was later rebuilt in stone, and then the stone reused to build a Norman castle, and probably the church too.

The church, fort and ruined castle are part of the Hadrain’s Wall World Heritage site.

There are suggestions, based on the sundial on Bewcastle Cross, that there may have been a monastic cell in the remains of the Roman fort. If the 7th century cross is in its original position, then there may well have been a religious building here at that time.

The earliest recorded church dates from 1277, though only the east end remains. Building material was taken directly from the roman fort remains. The present church was rebuilt in 1792, and past rectors have included successful reivers, clearly identifying closely with their flock. 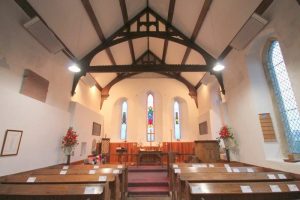 The first day of spring is one thing, and the first spring day is another – the difference between them is sometimes as great as a month! And while officially spring starts on 21 March we’re wondering if it will ever arrive this year.

The day before that is St Cuthbert’s Day, a time when Bewcastle can celebrate its saint’s day.